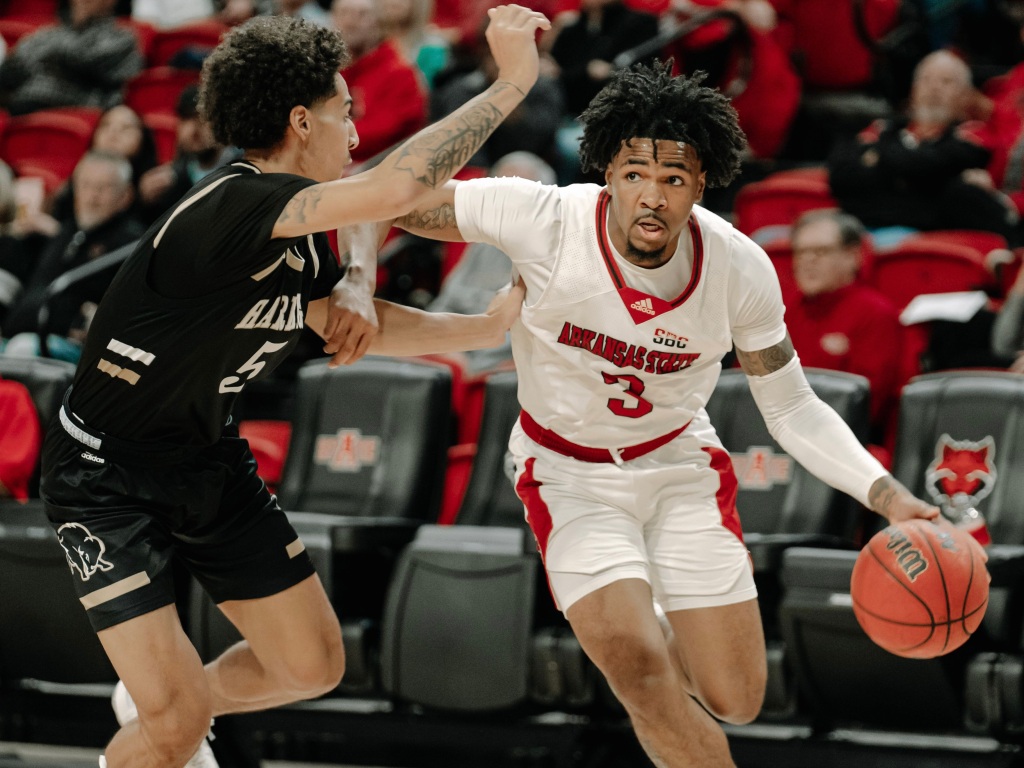 Comic books are a wealth of colorful onomatopoeia. Every super punch and godly blow bears its own distinct noise. Thor’s hammer, Mjölnir, is often delivered with a mighty THOOOM! A judo slam from Batman might elicit a KOOMP! Last night, against the heroically undersized Harding Bison, the sound I heard resonating from the Red Wolves was KER-THWAK.

So much KER-THWAK. The 81-55 scored doesn’t quite illustrate the devastating quality of last night’s destruction. The Red Wolves, clearly enjoying the carnage, could be seen goofing on the offensive side of the ball, chucking up three-pointers (come on, Norchad!), experimenting with risky passes and executing about 8 dunks. On defense, the team seemed far more focused, forcing 21 turnovers, pounding 8 blocks, and collecting a dozen steals. Harding will likely not be treated so cruelly for the rest of the season.

The three-point shooting wasn’t particularly crisp (3-16), but the stars put in the work, with Omier supplying his now standard Double Double and newcomer Desi Sills posting 21 points and a menagerie of dunks. Marquis Eaton started cold before turning on the electricity, elevating both his game and his hair. He’d finish with 10 points. Eleven of the 14 players who saw the floor dropped a bucket.

This is Harding and Harding is Harding, but the Red Wolves looked incredibly comfortable in their roles, rarely looking out of sync and hungry for applying their strengths to the cause. Will this team look as comfortable against #11 Illinois on Friday? That’s asking a lot, I suppose. But we may be looking at the most complete and most competent team we’ve seen in Jonesboro since the new Sun Belt took shape in 2001.

Photo Credit: Arkansas State Athletic Department coupled by a clumsy edit from me