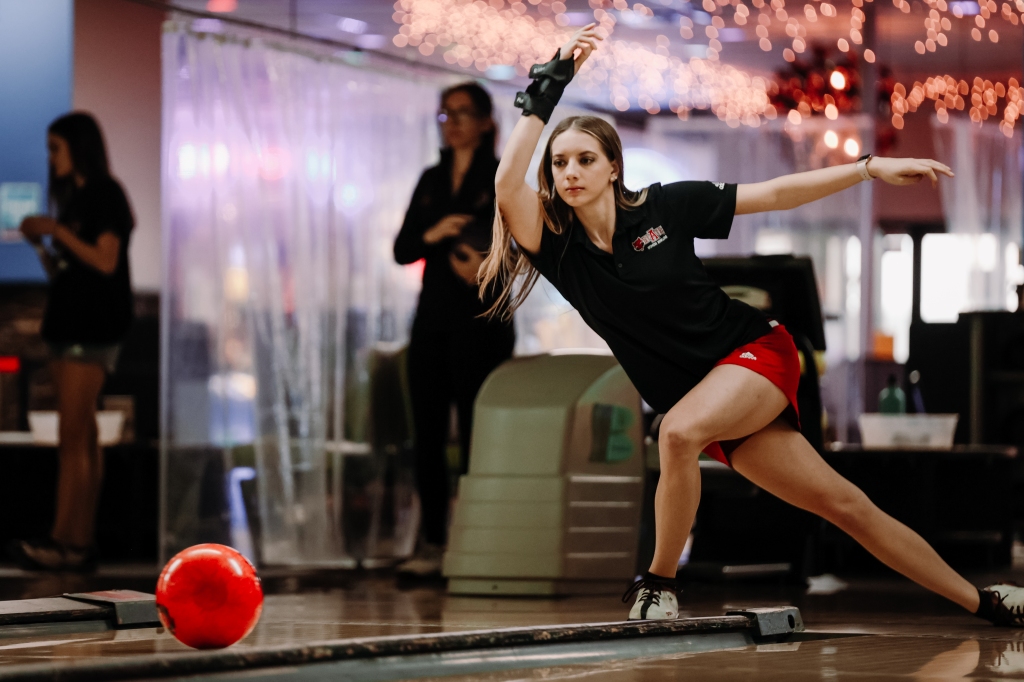 For Justin Kostick, bowling is a family business. His cousin (beloved and departed) was a PBA bowling champion. His stepfather is 39th on the all-time PBA bowling list. His father owned a successful bowling alley in Washington. Kostick himself was a former Junior Olympic gold qualifier. The legacy alone is probably enough to get hired as head bowling coach for A-State.

However, the alphabet plays a larger role in Kostick’s path to Jonesboro than any bowling lane.

“You used to be able to see which schools offered bowling on NCAA.com,” explains Coach Kostick, “So I just went down the list. Alabama State was first. Just so happened, the Arkansas State coach, Chris James, had just resigned, so I sent Dean Lee a résumé. He called me back in three hours.”

The NCAA hosts 90 national championships for 24 sports. Among those sports is women’s bowling, a lane from which Arkansas State has excelled for more than a decade. This season, Kostick leads the roster to its 13th consecutive NCAA Bowling Tournament appearance – the 11th straight under Kostick.

As head coach, Kostick has compiled a 752-311 (.707) record in nine seasons and has recorded two national semifinalist finishes in the NCAA Tournament, along with seven finishes tied for fifth place.  He’s also acquired Southland Bowling League titles in 2016 and 2018.

The only thing eluding Kostick is the national title.

I sat down and chatted with Coach Kostick – a rugged, round-faced, hyper-verbal dynamo who’s quite frank about his frankness. Furthermore, he bears an encyclopedic mind from which he produces bowling stats and memories with Deep Blue efficiency. I must admit, I learned a great deal about bowling.

Coach Kostick On: How the great state of Arkansas can stop sucking at bowling

The Red Wolves bowling roster features just one athlete from Arkansas: red shirt junior Lauren Bunting from Cabot. The rest of the roster is comprised of talent from places like Missouri, Ohio, Michigan, Illinois and Tennessee. I asked him how we could improve the recruiting base in the Natural State.

“We need more touring teams,” opined Kostich, “That’s how Tennessee became a better state for recruiting. We need a tour league in Arkansas to play in tournaments in Texas, Tennessee and Oklahoma. Change the mindset of bowling being a competitive sport from a rec sport.”

According to Kostich, there are some Arkansas high schools that are fielding bowling teams, but there’s not enough competition or “difficult oil patterns” to coach skilled talent. (We’ll touch on oil patterns later.)

Coach Kostick On: What sits atop his big wishlist

Red Wolves bowling is routinely atop the nation, but it can always be better. I asked Coach Kostick what was #1 on his wishlist.

“I could use a permanent assistant.”

I kinda wanted to hear “On campus lanes” because I’m also pushing on-campus lanes, but he wasn’t having it.

“Our facilities at Hijinx Family Entertainment Center are great. We have our own locker room, I’ve got an office. What I want is a full time assistant, like they have at Vandy and Nebraska.”

Turns out, managing a roster of 9 to 12 athletes can be a challenge, especially in a sport that demands that each player receive individual instruction. He had nothing put praise for his current assistant, Thashaina Seraus, but what he needs is more eyes.

The National Tenpins Coach Association (NCTA) ranked the Red Wolves #2 in its latest poll, yet the NCAA placed A-State something akin to a five-seed in the tournament bracket. That feels a little weird, right?

“I felt we were kind disrespected there,” said Kostick, struggling to maintain diplomacy (there’s that frank frankness). “We should have been first or second overall.”

This year’s tournament format has expanded the field to 16 teams, with half being automatic qualifiers (AQs) who won their conference. Kostick isn’t wild about AQs, which might be an attempt to bring more schools into the bowling fold. That’s well and good, but Kostick would prefer that only the best teams get in.

“I don’t fault the committee,” explained Kostick, “They’re working with what they’ve got, which after the AQs is comparing RPI. But RPI doesn’t really measure a bowling team. We average about 202 pins. There’s a program with a better RPI averaging 170. How does that compare?”

Kostick compares college bowling to golf. “You’re not playing defense. You’re playing the lane and the oil pattern. You can’t control what the other team is doing. The only way to measure a team is through an extended period of time.”

Coach Kostick On: The balls it takes to win an NCAA Championship bowling tournament

“Last year, I knew from the start Vanderbilt was going to win,” said Coach Kostick. “It was all in their focus and body language.”

Because bowling is a matter of “playing the lane,” there is a level of mental toughness that each individual athlete must possess to win. However, bowling is also a team sport, and how a team projects its chemistry can rapidly affect the outcome.

“I’ve seen teams down 1-3 end up winning 4-3 by feeding off the energy off a single spare pick-up,” said Kostick. “I’m constantly telling our girls to watch their body language and remain positive. That’s what gets you over the hump.”

I asked Coach Kostick about the make-up of this year’s roster, pressing him if the team has found a new Jordan Richard or Julia Huren. I mention Taylor Davis, the sophomore who rolled a perfect 300 earlier in the season. Kostick, even with his frank frankness, was hesitant to declare a team queen.

“This year, we have a lot of players who are highly skilled, but are similar in talent – high All-American talent. So I have more depth than I’ve ever had before. That means I can do more rotations.”

Despite the NCAA attempting to format bowling in a way the causal sports fan can easily comprehend, the reality of the sport playing a head-to-head style bracket is complicated – even when evaluating an opponent.

“We haven’t met Delaware State this year,” said Coach Kostich, “but it doesn’t matter; you’re playing the lane and the pin. We’re averaging a 202, they’re in the 190s. I don’t know what their oil patterns they’ve played on.”

Ah, the oil patterns. Oil patterns can be easy or tough. Pros play lanes bearing a much more difficult oil pattern than the lanes where you hosted your kid’s last birthday party. It’s a complicated, scientific voodoo thing.

Just understand that bowling lanes can be as different as a golf course – which makes it a challenge to evaluate teams. One program’s 190 pin fall average could equatable to another program’s 202. You just don’t know.

Still, you get the feeling that despite not having a full-time assistant and his qualms over the Red Wolves’ seeding, Coach Kostick feels good about the Red Wolves’ this year. They’re coming into the tournament hot, he likes his depth, and he gets to play with that seeding chip on his shoulder.

Special thanks to Coach Justin Kostich and Mark Taylor