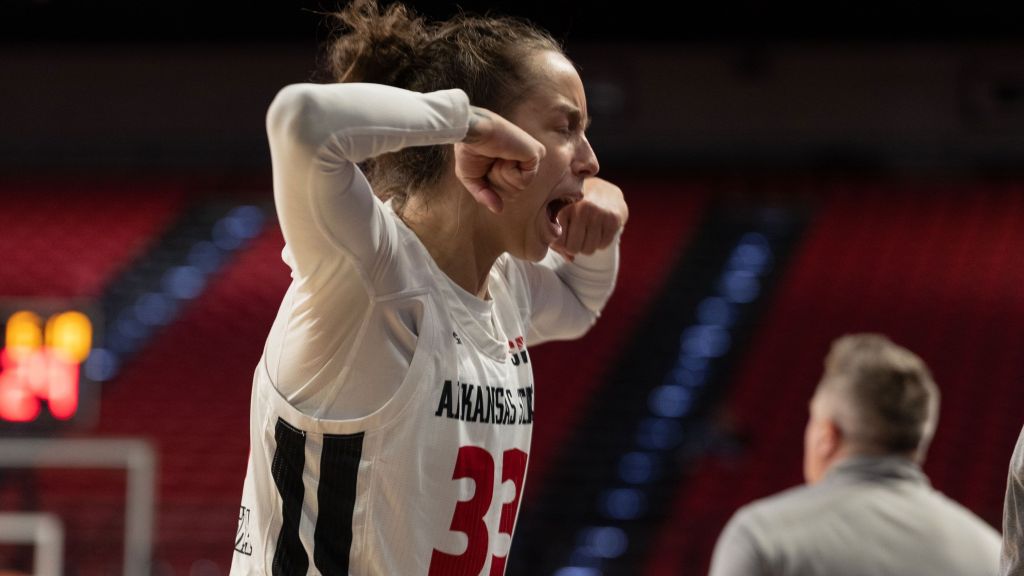 On March 21st, 2005, 10,900 fans crowded into the Convocation Center to witness a rare meeting between the two largest sports programs in Arkansas. Compelled to appear by order of the NIT, the Razorbacks Women’s Basketball Team met the Arkansas State Women’s Team in Jonesboro, where Ali Carter Brooks led the Indians to a 98-84 victory over their well-appointed rival.

“This was just a great win for us tonight and a phenomenal crowd. This win is for all of the past players and coaches as in ASU women’s basketball history,” head coach Bryan Boyer said. “This is great for women’s basketball in the state of Arkansas and our players deserve this victory.”

It was so great for women’s basketball in the state of Arkansas that the Razorbacks continued to avoid their Northeast colleague for nearly two decades. The petulant dodging ends 7PM Friday night, when the two programs clash at First National Bank Stadium.

Some of us will shrug. Decades of enduring Arkansas’ indifference has compelled us to show them the same. Some of us will enthusiastically welcome this new era. After all, engaging the programs makes logistical, financial and spiritual sense. Many of us will see Red Wolves vs Hogs as a measuring stick. So far, the school in Northwest Arkansas has defeated Red Wolves soccer by a goal, and Red Wolves baseball was bested 8-4.

Just hours before the latter, a ridiculous story was posted in northwest Arkansas bearing this idiotic headline:

“Wow, what a huge night and a huge opportunity for the Arkansas State Red Wolves at 6:30 p.m. at Baum-Walker Stadium when they face the Arkansas Razorbacks,” Wood wrote. “Tonight might very well be the biggest baseball game in the program’s history.”

Kinda makes you want to do some rage karate in the backyard, right? Yes, the Razorback propaganda machine will continue to shovel this condescending shit at us. Good. GOOD! Bring it, bozos.

My more clear-headed analysis: the game represents another step in normalizing the athletics relationship between Arkansas State and the University of Arkansas. By the time Red Wolves and Hogs meet at War Memorial Stadium in 2025, the novelty will mostly be worn, and the actually rivalry can begin.

Until then, we have women’s hoops. Contrary to public belief, this is not the second all time meeting of the programs. Friday will be the ninth meeting, with the Hogs owning a 5-3 record over Arkansas State. The Razorbacks will bring a liberal sprinkling local flavor to the opposing bench, with Nettleton High standout Elauna Eaton returning to NEA. Her brother, Marquis, starts for the A-State men’s team. Loyalties will be tested!

Both teams enter the contest 2-1. Neither team was predicted in the preseason to challenge for their respective conference titles. Both teams are capable of putting up points. Red Wolf to watch: Lauryn Pendleton, who’s averaging 15.7 points and four assists. She and her fellow “Splash Sister” Jade Upshaw have each scored in double figures in all three games to open the year. Hog to neutralize: Erynn Barnum, who is nailing 48% of her shots and has recorded 14 points per contest. On paper, both teams appear evenly matched, with only head-to-head play the true measure of superiority.

The NIT match in 2005 was the largest crowd ever to appear at an Arkansas State basketball game – women and men. Friday’s game has just as much impact on the state of Arkansas. You can catch the game by summoning the dark magic of ESPN3, but it’s crucial that you, Northeast Arkansan, fill a seat at First National Bank Stadium and lend your voice to supporting a new era of sportsmanship in the Natural State. Win or lose, the Red Wolves are stepping onto a bigger stage.

Wow, what a huge night and huge opportunity for Arkansas Women’s Basketball. You can a part of history.