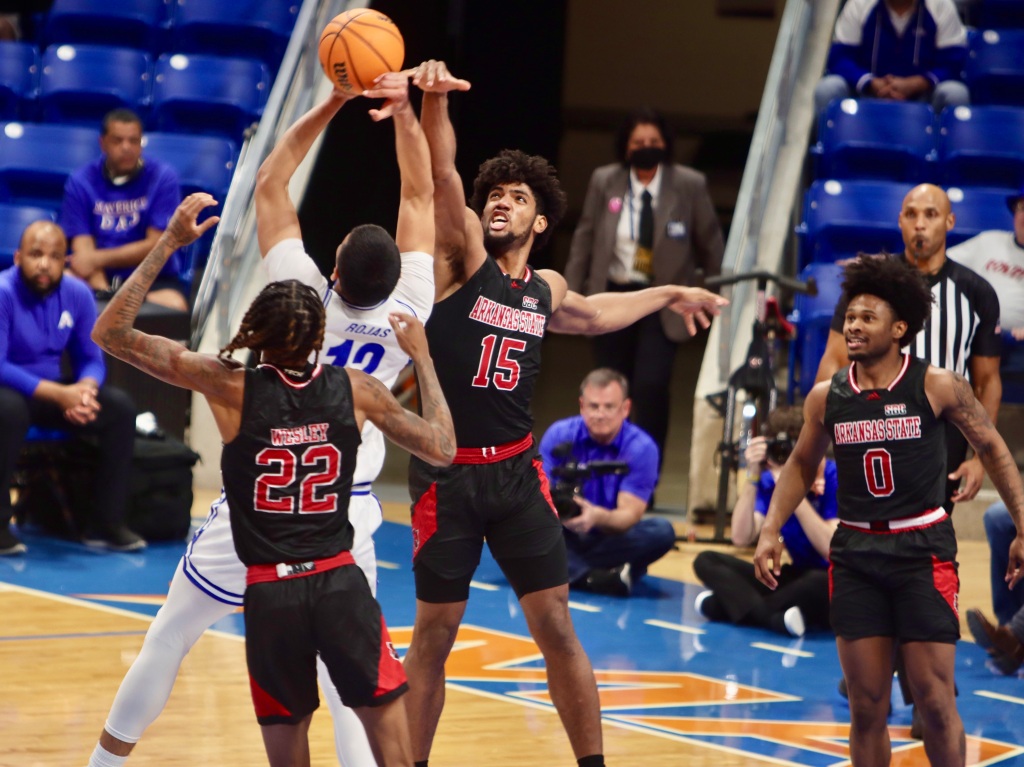 Yes, the UT Arlington team that shocked the Sun Belt early in the season by starting conference rnece play 4-1 is only a fond memory for Mavericks’ fans. Since then, the Mavs are just 3-7 and looked to be running on vapors against the Red Wolves, who held UTA to just 29% shooting on Saturday en route to a 59-48 victory. Still, it was an important road win for Arkansas State, who finish the swing through Alabama and Texas 1-3 and in 6th place in the tight Sun Belt race.

David Azore, the Mavericks’ dangerous sharp shooter who was averaging 25 points per game in Sun Belt play, was held to just 4 points until the waning two minutes of the game (he finished with 11). Only a last minute spurt of scoring pushed UTA past 40 points. Give credit to a spirited Arkansas State defense, led by Norchad Omier’s two blocks and three steals.

The Red Wolves seemed especially motivated to close escrow on UTA. After giving up 21 turnovers on Thursday, A-State cut that total by a third on Saturday, electing instead for converting assists (16). Omier was especially business-like in his approach, leading the team with 22 points and 16 boards, dropping 10-footers with ease as the Mavericks helplessly looked on.

The performance was not without its trouble zones. Arkansas State launched 20 three-pointers on Saturday and converted exactly two, with three-point specialists Malcolm Farrington and Avery Felts combining for 1 of 8. That’s troubling! Very troubling indeed.

With the win, the Red Wolves are 7-6 in conference play with two remaining games in Jonesboro against Coastal Carolina and Appalachian State.