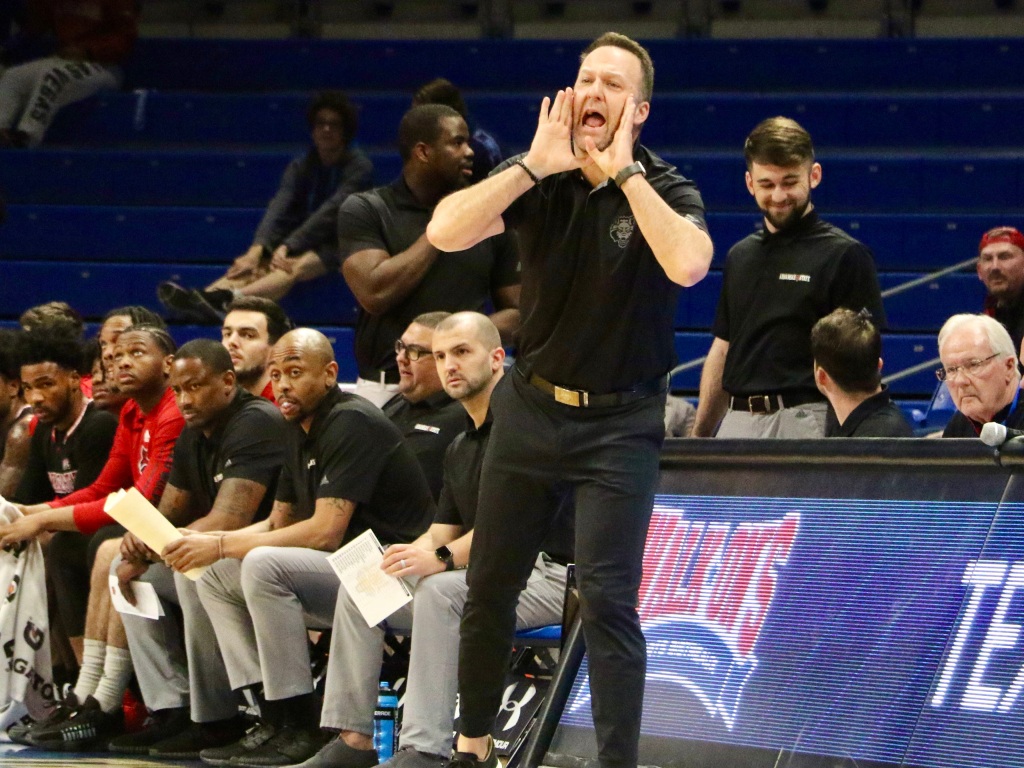 When the Red Wolves trundled into the visitor’s locker room after an especially dispiriting loss to Texas State, the team remained in congress for the next hour – never pointing fingers, refusing to project negative, looking for the positive. At one point during the players-led meeting, head coach Mike Balado attempted to take the blame for the sloppy 84-67 defeat.

The team wouldn’t allow it. Desi Sills, coming off 3-8 shooting, stood up and said, “I got to do better.” Team leader Marquis Eaton immediately echoed the sentiment for himself. The team owned up to its mistakes, and moved on to a business-like win over UT Arlington.

The Red Wolves enter the last two games of the regular season secured by the confines of home and approaching games against Coastal Carolina and Appalachian State as vital to securing a conference tournament bye.

“Believe it or not, we still have a shot at the bye,” said Coach Balado during Monday’s presser, though the battle is steeply uphill. The Red Wolves are 0.045 percentage points behind fourth place Georgia State, with the South Alabama Jaguars lodged between the two teams. The Panthers finish the season at home against ULM and Louisiana, while the Jags also conclude the regular season in home confines – against UT Arlington and first place Texas State.

Like the bulk of Sun Belt programs, the Red Wolves are strong at home with 10-2 record. Arkansas State shooters could use familiar surrounds after struggling with their buckets – notably in the win over the Mavericks, where the Red Wolves shot an alarming 2 for 20 from the three arc.

“Of the twenty shots taken, we counted 17 that we considered wide open. We made two,” said Balado grimly. However, he was pleased with how the Red Wolves responded to the basket struggles. “I liked the way we moved the ball. I liked how we got back on defense. Shots just weren’t going in.”

Also impressing Balado is Norchad Omier’s growth as a defender, who has add steals to his repertoire, recording eight robberies in his last three games, placing the conference’s leading rebounder 8th in the Sun Belt for thefts.

When Coastal Carolina arrives to Jonesboro for Wednesdays game, the team will be enduring a litany of nagging injuries. Many are playing through plain, according to Balado, including point guard Caleb Fields, who still isn’t 100% from an ankle injury suffered against Troy. The team will have to push the discomfort aside against the Chanticleers, who are 6-8 in conference but have a knack for upsets, including a recent win over Troy on the road.

“The three offensive players we need to stop are Vince Cole, Rudy Williams and (Esam) Mostafa,” said Balado, who called Mostafa one of the best bigs in the conference. “The key is stopping those three top scorers.” Cole leads the Chants with 15.5 points per game, while Mostafa is pulling down nearly 10 boards.

Looking briefly ahead to Friday’s game with Appalachian State, Balado shared his thoughts on two players that have been with him since the beginning of his tenure at Arkansas State – Christian Willis and Marquis Eaton. “They’re like my own kids,” said the head coach, admitting Friday’s game will be an emotional one.

The Red Wolves host the Coastal Carolina Chanticleers at 6PM on Wednesday, with coverage available on ESPN+.