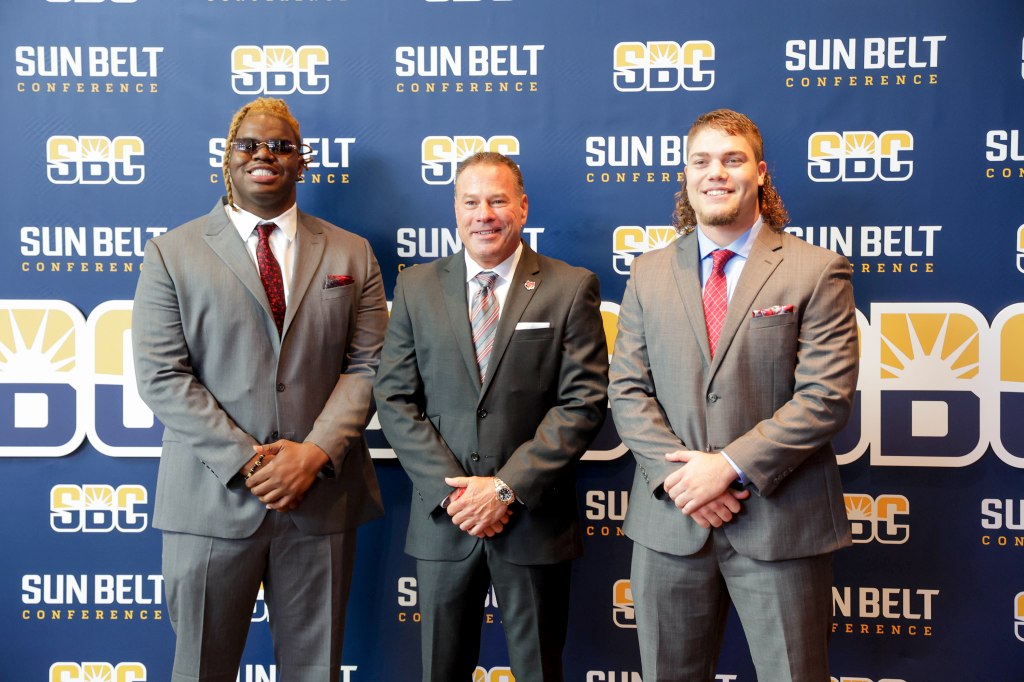 I’m no expert, but I suspect Sun Belt Media Day is much like any college football conference media day: Enormous football players crammed into new suits. Stone-faced coaches practicing their lines inside their heads. Reporters looking for free snacks. I honestly don’t know for sure. I took it in virtually, which is another way to say I’m cheap.

Taking Sun Belt Media Day in from the dining room isn’t ideal, but at least the fridge is nearby. It’s also a little relaxing. There’s a flow to the proceeding. Every coach is asked about NIL, COVID protocols, and the Sun Belt’s place in the college football solar system. Absent of wacky personalities like Mike Leach, the Sun Belt sound-byte smorgasbord is mostly glutton-free and lightly spiced.

A couple hours before assuming the podium, Jones is asked by a suit from ESPN if he’s “acclimated to Jonesboro,” as if the city was located 15,000 feet above sea level. Jones, a real pro, knew what to say. “It’s a special community. You can feel the energy. Everyone is committed to Arkansas State University.”

Since stepping foot into Northeast Arkansas, Jones has made it a priority to compliment Jonesboro. At one point in the press conference, he even likened Jonesboro to a “mini-SEC town.” I’ll take his word for that. Why not? He opened his 2:00 PM slot by praising A-State leadership, dropped a couple obligatory lines about academics, declared his staff a “unique blend of youth and experience,” and then fielded some questions.

Because he’s fresh from the SEC, the press would like Jones’ perspective on the Sun Belt. “What makes the difference in the Sun Belt is commitment,” says Jones. “The facilities. The scheduling. The hires. It’s a credit to Keith Gill’s leadership.”

He calls the Sun Belt among the most competitive in the country, which is hardly a controversial statement. The SBC is on the rise. But is Arkansas State positioned to rise with it? Jones indicates that success starts with the beef up front.

“We have to become a more explosive, powerful football team. We got to get tougher mentally and physically. It all starts up front. We have to be able to to run the ball. And stop the run. If you can’t, you’re in for some long Saturdays.”

From these shriveled tea leaves, you begin to see where Jones felt the most work as needed at A-State, and it’s confirmed by defensive end (and occasional fullback) TW Ayers.

“We need to come up with a new level of physicality,” says TW Ayers. He added that, coming off a 4-win season, the team was willing to do whatever it took to regain its competitiveness. Apparently, whatever it takes involves a shift in culture. At one point, Jones revealed that many of the players had softened to “up to 40% body fat.” Not acceptable from a Disciple of Saban.

Body fat aside, Jones speaks mostly in broad strokes. I decided ask a question with hopes of receiving a more specific answer: With six dudes in the quarterback room, what will it take to win the position? Jones’s answer is shrouded in coach speak, but reveals his nature nonetheless: nonsense need not apply.

“Consistency and performance,” he answers in almost a clipped tone. “The individual who can manage the game and get us in the right situation. No catastrophic mistakes.”

Mistakes is just nonsense with consequence. Butch Jones is having any of it.

PHOTO CREDIT: Supplied by The Sun Belt itself