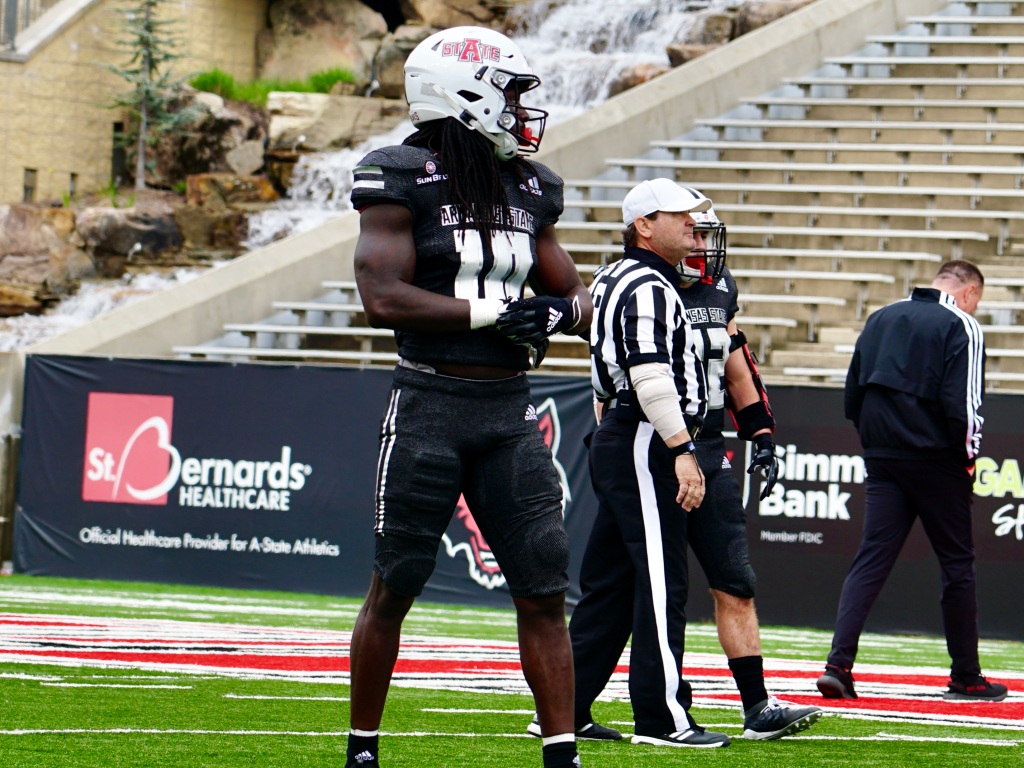 Last year at this time, I was asked to submit A-State’s ten best football players, and I found the task unsettlingly difficult. The unknown variables proved part of the problem – new head coach, new staff, and an ass ton of unsettled positions contributed to the fog. More daunting was determining what we mean by “best.” For example, Kivon Bennett might be the best player on the team, but does that make him the most essential? Is he impossible to replace? Does his presence on the field alter the opponent’s game plan? If he fails to do his job, are the results catastrophic?

On that last point, you can argue that Samy Johnson isn’t the “best” player on the team, but he plays a position for which a single failure is highly detrimental to the game’s outcome. That makes Johnson, coming back from a mixed-bag year, crucial to the team.

Who are the Red Wolves most crucial players entering 2022? I list them here in no order of crucial-ness.

First one up is a “duh.” Teams without capable QB don’t win in the Sun Belt. Blackmon was, let’s say, uneven in 2021 wrestling with injury and ineffectiveness while acquainting himself with a new team. As it stands, Blackmon is favored to head the huddle – but popular freshman Jaxon Dailey will be the name on fans’ lips should Blackmon stumble.

Bennett’s play was among the few bright spots for the Red Wolves in 2021, earning All Sun Belt 2nd Team Defense in his first year in the conference. Now reportedly moving from DE to linebacker, Bennett brings his hard hits to a position that has lacked fierce athleticism in recent seasons.

Last season was supposed to be the Jeff Foreman and Corey Rucker Show at Wide Receiver, which never really materialized. Now Rucker is gone, and Foreman is left to make the big plays. Does Foreman have that gear? He has the talent, but last season, his focus seemed elsewhere. If Blackman is to succeed, he’ll need Foreman to reacquire his lost mojo.

Speaking of lost mojo, what is the dealio with Marcel Murray? Since his electrifying 2018 freshman season, Murray has seen more sidelines than headlines. At the end of last season, Murray even took a brief dip into the Transfer Portal before changing his mind and putting in a strong performance at the Spring Game. Is Marcel back? Or did we see his best three years ago?

The linebacker squad needed a leader, and Butch Jones picked up a King. A four-star prospect, Mwikuta transferred from Alabama to give the defense another avenue from which to lay pain. If Kwikuta works out as well as Bennett, we’re looking at a linebacker combo that may be A-State’s best in years.

Toll’s journey to Arkansas State plays out more like a saga than recruitment. A three-star recruit from Hazen, Toll bounced from Arkansas to Colorado to Jonesboro, finding his way to Butch Jones and his appetite for bigger, stronger players. The spring word on Toll has been all gold-stars, which is fantastic considering the drop-off on stacks the team endured last season.

Arkansas State has struggled with acquiring the USDA graded beef in recent seasons, and Coach Jones is always trolling the portal for additional pounds. Ethan Miner, who was recognized for his improvement and consistency this Spring, is essential at center and will be kept busy preventing Blackman from eating turf.

Hunt posted 740 yards and 6 touchdowns in 2021, punctuating the season with some big plays. He was also a contributor to a wide receiver squad that dropped an insane number of catchable passes. Hunt is a team veteran with the size and ability to deliver a big season for the Red Wolves.

The hulking, 306-lb is projected to start at tackle this season, which puts a lot of pressure on the redshirt freshman’s massive shoulders.

* Since this story posted, King Mwikuta has left the program.