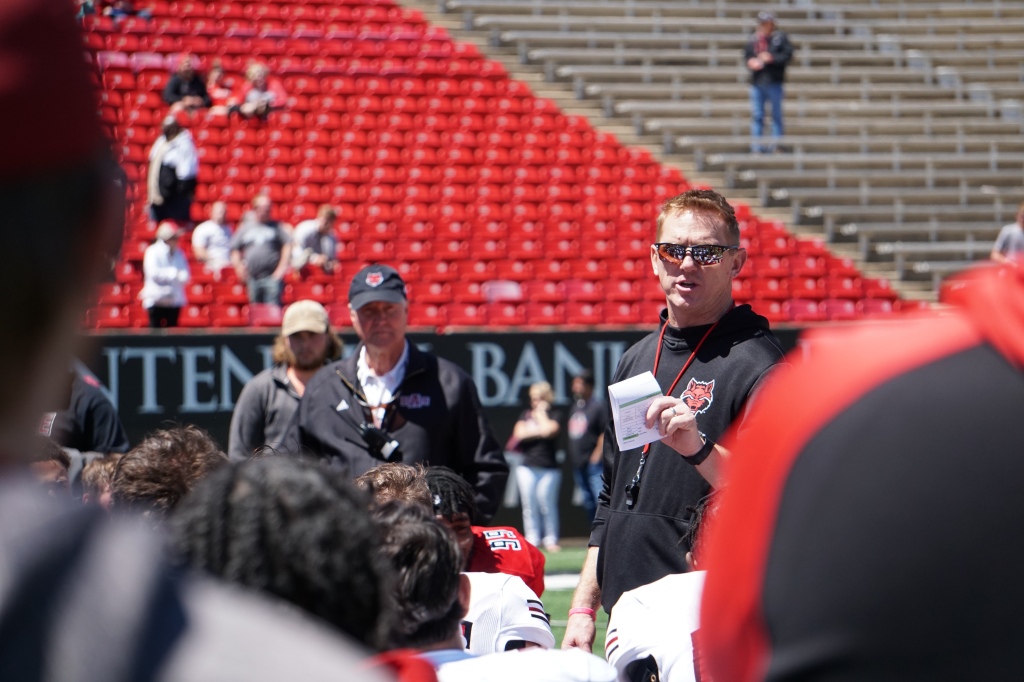 There’s 16 left in the second half, and the Red Wolves defense seems puzzled.

Arkansas State had just scored the game-tying touchdown, but the Texas State Bobcats had taken the ensuing kickoff to about midfield. The Red Wolves went into automatic prevent defense mode. Instead of taking a knee and heading to the locker room to regroup, Bobcats head coach Jake Spavital opted to fight.

Methodically, mercilessly, Texas State quarterback Brady McBride picked apart the soft Red Wolves secondary until the offense reached a reasonable field goal distance. Arkansas State couldn’t fathom what was going on. Both teams jogged to the locker rooms with the score no longer tied, but with the Bobcats owning a 3-point advantage.

Texas State would end up winning by 2.

The sequence that resulted in three points for Texas State underscores the passiveness of the Blake Anderson Era. Spavital, young and hungry, pushed his team for the points. Anderson, now a ridiculous 1-5 in Sun Belt play, is known for taking his foot off the gas with leads; for taking a knee in the closing seconds of the half – so odd considering that this is the same offensive staff that will happily attempt a flea-flicker in the red zone.

Aside from a mostly disastrous string of trick plays, Anderson’s “soft and fun” style of play has taken the program onto a winding journey to the Sun Belt’s Basement. The ineffective three-man rush, the maddening coverage cushion, the even-snap two-man QB rotation reveals a team that is indecisive and without confidence.

The loss to Texas State is the latest in the series of tumbles to the Sun Belt Basement. Since last season, the Red Wolves are 5-8 versus the Sun Belt with losses to South Alabama, Georgia State, Coastal Carolina (first time) and now the Bobcats, a team A-State had beaten six consecutive meetings. The Red Wolves have lost three straight to the Cajuns, and two consecutive to the Mountaineers. Were it not for ULM, Arkansas State would occupy last place in the Sun Belt West. To avoid the first losing season since 2010, the Red Wolves will have to win out.

The Era of the Red Wolves is over. The program, considered by many to be the model of the Sun Belt, has stalled while upstarts like Coastal Carolina are rising. The Red Wolves aren’t reloading. It’s not even clear if they’re rebuilding.

We’re just scratching our heads, wondering why our opponents aren’t taking a knee.